Up until now, we have talked about working with a lot of low-power devices. Sensors, LEDs, ICs, and the like are all capable of being powered directly from your Arduino, but as many awesome 5 and 3.3v components as there are, eventually you will find yourself holding a 12v solenoid, motor, or light and wondering "How the heck am I supposed to control this from my Arduino?" Well today we are going to talk about doing just that from a magical device know as a transistor, specifically the TIP120 Darlington Transistor.

The reason I'm covering this particular transistor is because it is readily available, and you can usually pick one up from Radio Shack, Adafruit or other local parts store in a jam, but you can use any NPN darlington transistor like the BD651 exactly the same way.

WARNING: I am about to simplify the crud out of this, so beware... it is here in an attempt to explain, in simple terms, what is going on.

If you don't know transistors at all, they are 3 lead components that have 2 simple functions, to switch or amplify (in this example it is setup as a switch). You basically have an In called the Collector, an Out called the Emitter, and a Control called the Base. When you send a HIGH signal to the base (control pin), the transistor switches and allows current to flow from the collector (in) to the emitter (out). 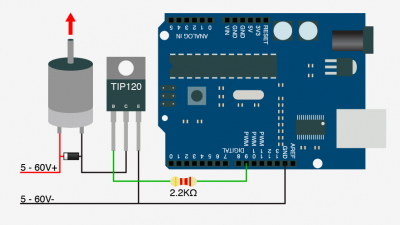 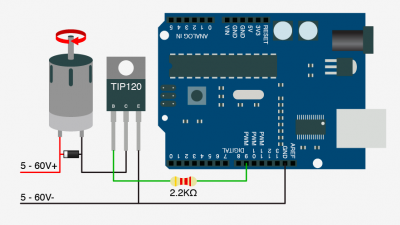 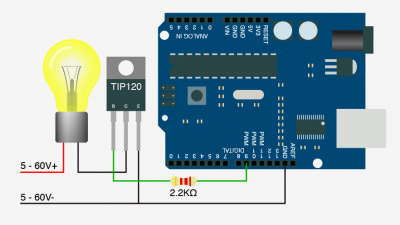 Hooking it up / What's the diode used for?

You can see that in 2 of the 3 illustrations, there is a diode parallel to the device we are powering. Any time you are powering a device with a coil, such as a relay, solenoid, or motor, you need this guy, and don't leave home without it. What happens is when you stop powering the coil, a reverse voltage, up to several hundred volts, spikes back. This only lasts a few microseconds, but it is enough to kill our transistor. So this diode (only allows current to pass one way) is normally facing the wrong direction and does nothing. But when that voltage spikes comes flowing the opposite direction, the diode allows it to flow back to the coil and not the transistor. We will need a diode fast enough to react to the kickback, and strong enough to take the load. A rectifier diode like the 1N4001 or SB560 should do the job. If you are looking for extra protection you could use an optoisolator between the Arduino and the transistor. An optoisolator optically isolates both sides (high and low power) of the circuit so the high-voltage can not possibly come back to the microcontroller.

Just make sure that protection diode is facing the correct way (stripe facing the V+ of device). If it is facing the wrong direction, the device you are trying to power will not work as the diode will just allow the current to bypass it.

Transistors like the TIP120 are really great for controlling high-power devices from your microcontroller, but they do have some limitations. This current configuration is only useful for switching DC current, so don't try this with an AC source, also transistors have both a voltage and an amperage/current limitation. The TIP120 can handle switching up to 60V, and the amperage is limited to 5A, or up to 8A pulses of 300µs. I have managed to blow out one of these with a 5A load because of heat. Actually anything over a few amps, especially when the current is constant (like in a motor) and not short pulses, I would recommend using a heat-sink. I usually just solder a bent pice of metal to the back, just something to help dissipate the heat. Just note, if you are using more than one of the TIP120s, you can not solder them to the same heat-sink as the back is connected to the base of the transistor, not the emitter. If you need to switch more than 5A or AC, I would look at using a relay instead.

You know the PWM outputs on your Arduino? Yeah, the thing that allows you to analogWrite(pin, value). Well, PWM is not actually an analog output. The Arduino is actually pulsing (very quickly) between 0 and 5v so that the average voltage is somewhere in between 0 and 5. Because of this, the PWM can be extended through the transistor (the transistor can only turn on or off, but can do so very quickly) allowing us to fade lights or control the speed of a motor just like if they were connected directly to the Arduino. All you need to do in order to take advantage of this is make sure the TIP120's base is connected to a PWM pin.

You don't really need code for this, you just send a HIGH signal to the base pin, and BAM... it works. But I threw this together for you so you can test it fading with the PWM- This code fades in a sin wave like the video below. (only useful for a motor or light obviously).

This video is showing the capabilities of PWM with the TIP120. The light, though it looks like a standard house light, is actually a 15W 12V DC light.

This is something so basic that you will find your self with an abundance of things to use this with. Most recently I put this to use in a few places: I helped a local artist create an automatic morse code machine, helped a friend prototype a touch-based light dimmer (test video above), and at work, I use it for controlling 8 musical bells over the internet.